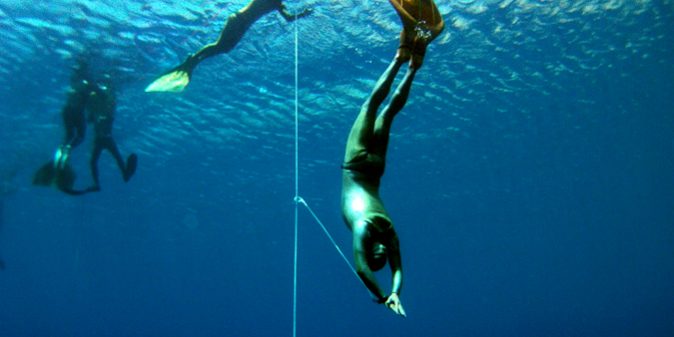 In 2013 Freediving was rated #2 most extreme summer sport in the world by outsideonline.com, where it says that “only BASE jumping is more fatal than Freediving.” Furthermore, the article mentions that out of 5,000 divers in the sport nearly 100 die yearly. For most people diving deeper than 20 meters on a single breath is considered dangerous and appealing only to those who want to risk their lives.

But is Freediving really a dangerous sport that only crazy suicidal people do? I have asked several freedivers: from beginners to professionals, record holder and instructors and asked them what determines a sport to be extreme and if they consider Freediving as dangerous.

Here are a few of their answers and they all seem to agree in one point. Freediving is pretty awesome and if done right far away from being dangerous. 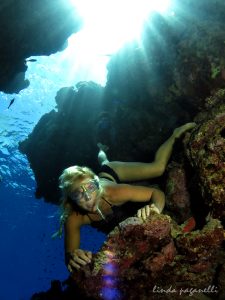 Annelie Pompe, is a former world record holder in the discipline of Variable Weight and has not only been one of the deepest woman in the world but has also climbed the Mount Everest in 2011. Annelie has been Freediving for 9 years and you can follow her adventures on her blog www.deepeverest.se.

“Just because something is dangerous, it doesn’t mean that it’s extreme. It’s dangerous to drive in a car, but no one calls driving a car extreme. It depends on what your definition of extreme is, for me the definition of extreme is something that goes very fast where you can’t really control everything around you and in Freediving you are very much in control! It is your own body, that’s the only thing that’s there, and in case you want to stop a dive you always can, unlike in base jumping or similar sports. Usually I connect an extreme sport with adrenaline but Freediving is the opposite of adrenaline. You are trying to be as calm and relaxed as possible.

I can understand that it seems crazy for people, to hold your breath and dive as deep as you can. It is a lot about lack of knowledge, that’s where fear usually comes from, and that’s why it might look extreme. That makes it so important that the media conveys a positive message about Freediving, but nobody wants to hear about that, they want to make it sound dangerous and as it is an extreme sport. I mean climbing is also considered as an extreme sport, but as long as you use a rope and the rocks don’t give away, it’s not extreme at all. It’s perfectly safe.

I totally understand that blackouts look horrible from the outside. It looks like someone just died. But when you experience a black out from the inside you just start dreaming and it’s not bad at all. There is no anxiety, there is no fear involved. There are not thoughts of “oh no, I’m gonna die”. Fading out outside the water can be a very bad thing, which could stand for a heart failure, or a brain failure, but in Freediving it’s the body’s response to save you. So the brain actually shuts down to prevent any damage from happening. And if it happens and as long as you have a safety diver it is fine!

Of course there are components in Freediving that are extreme, but if you push anything to the limit it is going to be extreme. You could push eating Apfelstrudels to become extreme as well. Anything can be extreme if you push it to the limit, but besides there is much more to Freediving than just that. Photography, snorkeling on the reef, spending time on shallow depth all these things are neither dangerous nor extreme.”

Peter W., who just started with Freediving two weeks ago, is doing a so called “zero to hero” program at Freedive Dahab, where he is aiming at starting Freediving from the very beginning and taking it up to Instructor Level in a period of 3/6 months. Peter decided to leave Ireland to stay in Dahab, Egypt for four months to become a Freediving Instructor. He never really did Freediving before his decision to leave his country and commitment to discover the sport in a full time program. At first he was a bit scared, but here is what he thinks about it now:

“Before I started, from what I saw on videos or what a friend told me, it always scared me. It may be the lack of knowledge and everything, but I was always scared of depth and these crazy people holding their breath, going so deep. And I don’t like to be scared! I hate that, you know. I remember when I started with motorbikes years ago, I was also scared. Actually many times in my life, but I’ve always tried to overcome that fear. That’s why I wanted to try Freediving. Still everything is very new to me and there is a lot to discover, but from what I learned so far I wouldn’t consider Freediving an Extreme Sport anymore. From what I know now I feel very safe and there are always people watching over me. I have to tell you I’m very happy that I’m doing it and made that decision to leave my home for something completely new. It’s incredible.”

Pavol Ivanov now lives in Dahab with the goal of becoming and Freediving Instructor to make Freediving his profession. For him it’s the people who do the sport that decides if it’s dangerous or not. But read for yourself what he has to say.

“Freediving is just as dangerous as everything else. Anybody who is looking from the outside to the sport would say it is dangerous but everybody has his own responsibility to what they do and if they refuse to take the responsibility they can put themselves in danger. But that’s not only in Freediving the case, that’s everywhere like that. For sure, Freediving is dangerous, if you don’t do it responsibly… That’s why I always wanted to be properly educated in Freediving and that’s why I am doing the Instructor Course at the moment. There are measures you can take to minimize the risk up to the point where almost no more risk exists. In the end, it is not more dangerous than any other sport. For me it is the people who practice the sport and how they do it that finally determines whether it is dangerous or not. Me, personally, in the two years I have been Freediving now, must say that I have never felt unsafe, nor experienced any black out or loss of motor control caused by hypoxia in the brain.

Freediving for me is being part of the nature. It almost makes me feel like I am some sort of aquatic mammal, haha.” 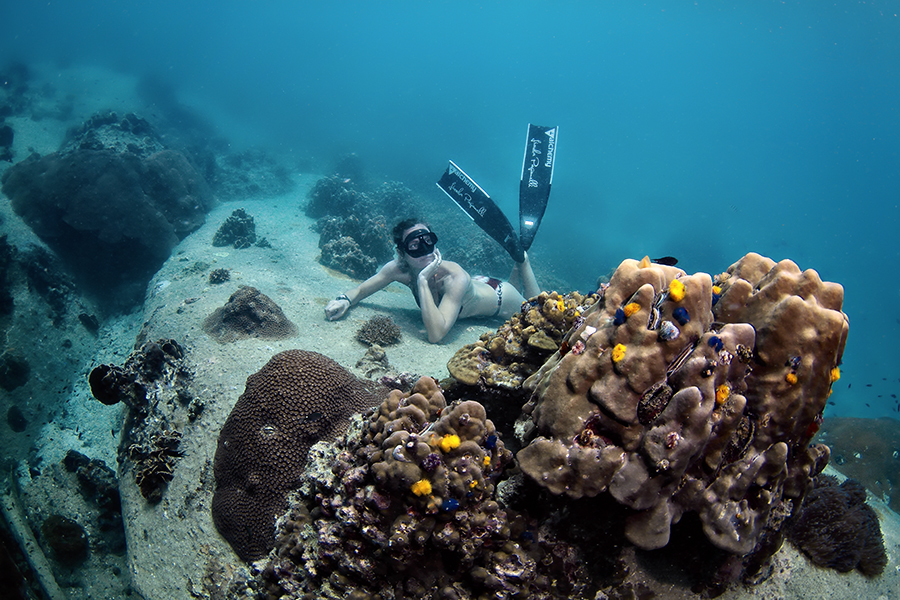 Linda Paganelli, has been teaching freediving since 2003 and has held most of the Italian records in depth disciplines since 2005.
I think Freediving is perceived dangerous from the people who don’t know anything about Freediving. If you do know something about it then you will understand that it is in fact a very safe sport. Of course everything brought to the limits has some risk, like in any sport: think of car racing, mountain biking, skiing; any of these sports at some level become dangerous.

In Freediving the rule number one is to “never freedive alone”, so we always dive with a competent buddy that is properly trained in safety. Those deaths you mentioned happened because these people are actually freediving alone; most of them while Spearfishing and not even Freediving. Others decide not to spend money on a course and they jump in the water trying to figure things out on their own, and sometimes it goes wrong. Only a handful of experienced freedivers died during training for depth, while hundreds die in extremely shallow water, even in the swimming pool, due to either inexperience or lack of safety. 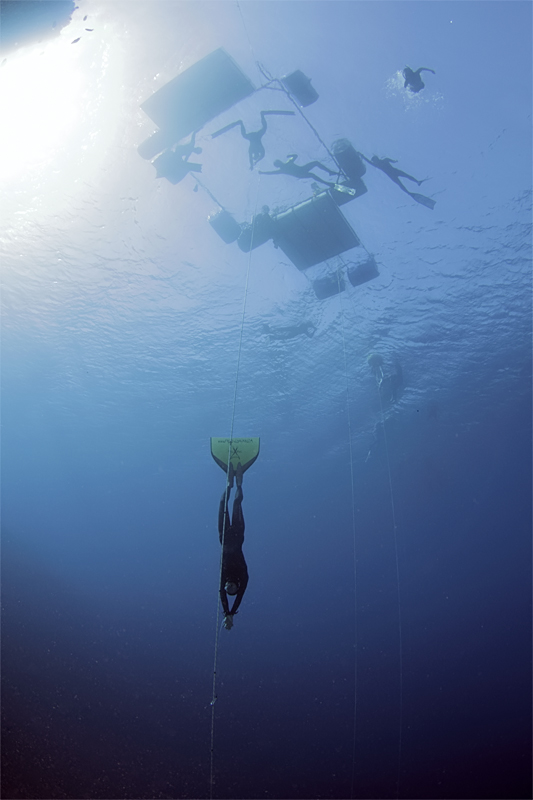 Another reason why freediving is seen as a dangerous extreme sport is that unfortunately there are some freedivers who for the sake of their individual fame give interviews, write articles and film documentaries where they are dramatizing the sport and its risks.

Let’s be honest, media likes drama, so if you want to stand out and be noticed you need to become a death defying god, but unfortunately this is really, really bad for the sport. They give the wrong image to all the people that don’t know about this beautiful and pure sport, and scare them away”

In the end, everybody I asked was agreeing in one point. Freediving can be dangerous if pushed to the limits, but only a few do so, and even then, if certain safety measure are applied very little can happen.

So, don’t let fear keep you away from trying Freediving, you will notice that it is truly a remarkable sport where you can learn a lot about yourself and the sea. Just remember to never freedive alone!

Dive safe and have fun on a single breath.

By Benjamin Boehme
Instructor and blogger at Freedive International

Are you safe when you go freediving in variable weight?
December 2, 2018

Safety in freediving: 6 f**k-ups that everyone is committing right now
October 31, 2018