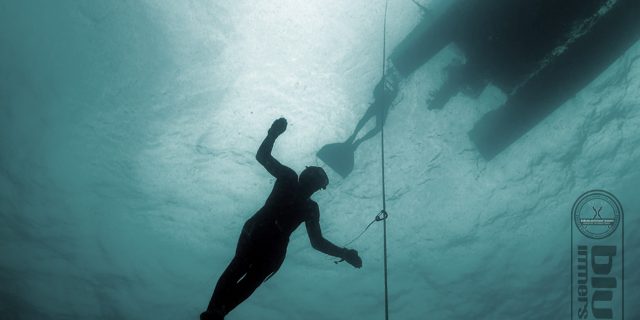 We are no scientists, but we are freedivers, and we want to understand as much as we can about the freediving science; and of course we are happy to share it with you!

The human body is an amazing and high tech piece of equipment and only in the most recent years we found out that we can freedive, and why.
In the late 16th century, chemist Robert Boyle predicted that diving beneath the oceans surface to around 30 meters was impossible due to the pressure created by the water crushing the human lung. According to “Boyles Law”, when the pressure increases on the outside of the lung, as it does when we dive down deep in the ocean, the volume of the lungs and the oxygen inside them must decrease by the corresponding amount by squeezing and compressing.

Eventually it was thought the pressure would become so great that the lungs and the oxygen in them would contract to their limit, thus causing the unfortunate diver’s lungs to rupture.

Boyle’s Law applied to freediving. As the freedivers descends his lungs are getting compressed; the deeper the depth the smaller they become. Image credit: source unknown.

Luckily for free divers, we now know that this is not necessarily the case.
Although it wasn’t until 1949 the theory was properly tested, when Raimondo Bucher, a Hungarian born, Italian fighter pilot believed that he could dive to 30 meters whilst spearfishing. Fellow Italian diver Ennio Falco put 50,000 lira ($800) on the table and told him to prove it. Modern free diving was being born.
Falco, wearing scuba gear, waited at the bottom of sea off the Italian city of Naples with a small piece of parchment inside a cylinder. When Bucher proved himself correct he left many divers and scientists scratching their heads. How could this be possible?

In 1962, some of these adaptations were first explored. Swedish scientist, Per Scholander found astonishing results when he simply attached heart rate monitors to volunteers and submerged them underwater. The heart rate of each subject dropped dramatically. He then asked the subjects to perform exercises that on land would cause the heart rate to rise, but once submerged their heart rate continued to fall. This is a process called ‘Bradycardia’
Scholander had seen this before when he studied the physiology of aquatic, air breathing animals. 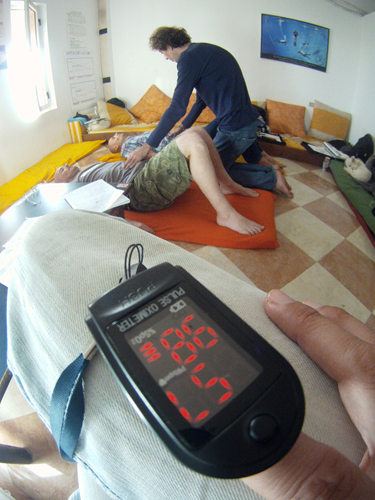 It is very easy to prove Bradycardia just by using a Oxymeter; which is a small device used by doctors to measure a patient’s arterial oxygen saturation at the same time as the heart rate. We use it on all our courses to show beginners how holding your breath, especially in the water, is reducing drastically your heart rate.

They seemed to be able to go into special state of relaxation, where the heart rate slows and peripheral arteries closed, which kept blood circulating thought the heart, lungs and other vital organs without consuming large amounts of oxygen. He called this phenomenon the ‘dive reflex’ allowing animals to spend much longer time underwater.
Curiously, Scholander demonstrated this in humans, as it was impossible to draw any blood from peripheral arteries from his submerged volunteers, calling the process ‘vasoconstriction’. 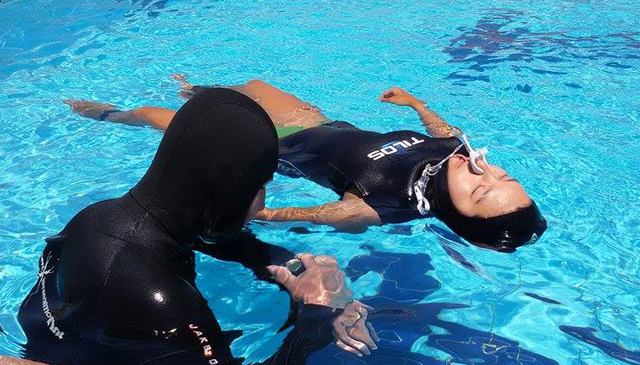 The dive reflex is stimulated also by immersion of water, especially of the face. For this reason many freedivers prefer using a noseclip instead of the mask, so that the face is in contact with the water thus increasing their dive reflex.

The question of Boyles Law was still puzzling to the scientific community. When scientists calculated the amount of oxygen inside the lungs of free divers, and compared it to the amount that was previously believed a human needed to survive, the numbers did not add up. It seemed that free divers are able somehow cheat death by surviving in huge pressures on small amounts of oxygen.

Another Swedish scientist, Claes Lungren discovered that the body has an innate ability to counter the increase of outside pressure by filling the lung’s blood vessels with blood and blood plasma. He attached a heart catheter and measured the blood circulation in the chest and thoracic cavity of volunteers. This is to ensure that the shrinking lungs don’t collapse under the residual volume under pressure. This ‘Blood Shift’ may be the most amazing adaptation discovered, and is what allows deep diving to be possible.

Only very recently, a new phenomenon was discovered which involves the spleen.
The spleen is a small organ that is known for filtering out old blood cells and also synthesising antibodies, but it also holds a huge reserve of unused blood. Once the dive reflex of a free diver has kicked in, the spleen will release this reserve, which will be dispersed into the thoracic cavity and has shown an increase to breath holds. This ability goes hand in hand with the blood shift to ensure that the vital organs have blood during the ‘trauma’ of a dive. Diving animals have been known to possess very large spleens and are essential for deep diving and also survival in water. In addition to an increase of blood volume in the chest cavity and diameter of the heart, the body also responds with an arching of the diaphragm upwards, allowing the abdomen to compress under pressure rather than the chest.

It’s important to note that Bucher and other divers and scientists did not disprove Boyle’s law, but we did find out that our body has quite a few hidden survival mechanisms up our sleeves. It seems that we have ingrained and innate ways to cope underwater, that we have evolved living on our blue planet. Approximately 71 percent of the earth is water and we are indeed 60 percent water ourselves. It’s only natural to suggest that we have some survival traits that have stayed with us. Scientists are still debating the reasons for all these seemingly dormant adaptations to water. Many believe that they are throwbacks of natural selection, where the game of survival of the fittest has left us with some abilities that will help in survival situations i.e, to prevent drowning. Others theory’s such as ‘Aquatic Ape Hypothesis’ believe that this all shows that humans are more connected to the ocean and that human beings are actually a more aquatic ape, born to dive for seafood and survive on the coastlines of the world.

Luckily for free divers these traits and adaptations can be exploited and even trained. Experienced divers understand their own reflex and the best way to make it work. Repetitive deep diving increases the efficiency of the dive reflex, causing increased bradycardia and a more effective blood shift. It also develops the flexibility of the diaphragm, lung tissue and thoracic cavity, this along with tolerance to CO2 and pressure can make diving much easier and make diving depths and times increase substantially.

We are still only scratching the surface of this new sport, with new diving techniques and theories being discovered every few years. It’s an exciting time to be free diving. Who knows what we can uncover in the future what discoveries we can find out about our past.
Next time you are feeling stressed and you need to relax, try holding your breath and splashing yourself with cold water. 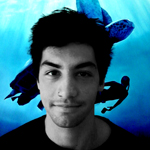 By Jules Muncey, intern and freediving trainee at Blue Immersion, Thailand. Jules is 23 year old, he did the level 1 last year at Blue Immersion and loved it. He finished his studies in Melbourne and moved to Koh Tao. He is now finishing his internship and will do the Instructor Course with us in September.

Are you safe when you go freediving in variable weight?
December 2, 2018

Safety in freediving: 6 f**k-ups that everyone is committing right now
October 31, 2018